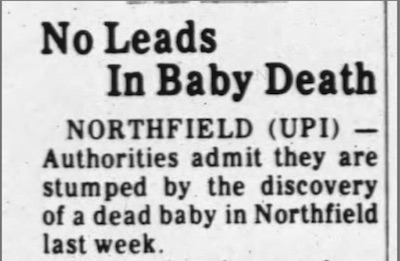 On March 31, 1982, the body of an infant boy was found in Northfield, Vermont. He was the victim of homicide, and had died shortly after birth. Police could not identify the child, who is now known as Baby Boy Doe.

The boy was discovered around 7 a.m. by four children waiting for a school bus. They were alerted to the body when they saw a dog dragging a bag. They found the child in the bag, wrapped in a towel.

News stories about Baby Boy Doe note that the police were asking hospitals and doctors about women who had recently sought treatment related to childbirth. They were looking for a women who had been pregnant, but no longer was, and possibly claimed to have given the child away. One detective stated that usually when they request help from the public, the police “Get quite a few calls… (But this incident) has been very, very quiet. We haven’t had much information at all.”

An autopsy determined that Baby Boy Doe had been born alive and biologically normal, and his death was caused by abuse. No physical description of the child is available, but his mother was believed to be a white woman.

About a month after Baby Boy Doe was found, a funeral service for him was held by the Reverend Frank Wisner III. About 80 people attended, including the state police officers investigating the murder. Wisner named the child Matthew Isaac.

There were several short newspaper articles about the baby in the weeks after he was found, but there appears to have been little media coverage since. In 1994, Baby Boy Doe was included in a list of unsolved Vermont homicides in the Burlington Free Press, but no new details were provided.

Anyone with information about Baby Boy Doe’s identity or death should contact the Vermont State Police Major Crimes Unit: 802-244-8781. Tips can be submitted anonymously at vsp.vermont.gov/tipsubmit, or by texting VTIPS to 274637 (CRIMES).

No Leads In Baby Death