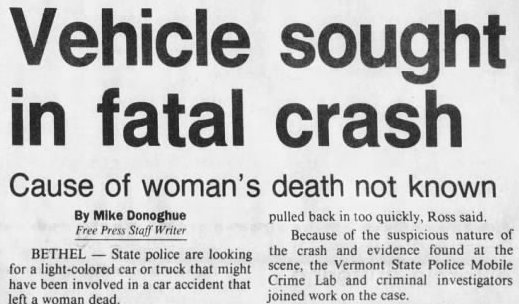 On Tuesday, April 29, 1992, Cheryl Lunna’s overturned car was found on Camp Brook Road in Bethel, Vermont. The car appeared to have gone off the road at a curve and landed in a stream. An investigation revealed she was likely run off the road by another driver. A suspect was eventually arrested, but no one was ever convicted for any crime related to her death.

END_OF_DOCUMENT_TOKEN_TO_BE_REPLACED

On March 31, 1982, the body of an infant boy was found in Northfield, Vermont. He was the victim of homicide, and had died shortly after birth. Police could not identify the child, who is now known as Baby Boy Doe. END_OF_DOCUMENT_TOKEN_TO_BE_REPLACED

On May 15, 1935, a human skull was discovered by two women picking flowers in East Middlebury, Vermont. They alerted the sheriff, and a search of the area uncovered the remains of three people: a woman and two adolescents. All three had been shot in the head; a .38-caliber bullet was found near the remains. The bodies may have been wrapped in a blanket and a striped awning that were found nearby. The three victims had been killed anywhere from a year to five years before they were discovered. END_OF_DOCUMENT_TOKEN_TO_BE_REPLACED